The CSMB New Investigator Award recognizes meritorious research in one or more of the fields of biochemistry, molecular or cellular biology in Canada. Recipients have ten years or less of independent research experience, and demonstrate outstanding research accomplishments. 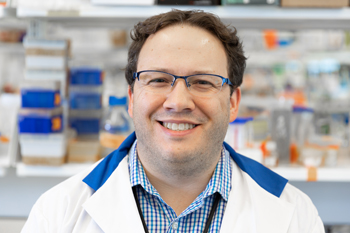 Greg Fairn received his Ph.D. from Dalhousie University in 2007 after studying yeast genetics, lipid biochemistry, and cell biology in the lab of Dr. Chris McMaster in the Department of Biochemistry and Molecular Biology. He then moved to the Hospital for Sick Children in Toronto to work with Dr. Sergio Grinstein. His postdoctoral work focused on macrophage biology, phagocytosis, cell polarity, and advanced microscopy. Dr. Fairn’s research program continues to focus on lipid and membrane biochemistry and its importance to cell biology and physiology. Ongoing projects involve studying the role of ER-phagosome contact sites, phagocytosis of pathogens and apoptotic cells, protein lipidation, membrane nanodomains, and vesicular trafficking. These processes are studied in the context of heart disease, cancer biology, infection and inflammation. Previously, Dr. Fairn received the Walter Shaw Young Investigator Award from the American Society for Biochemistry and Molecular Biology, an Early Researcher Award from the Ministry of Innovation Ontario, and a New Investigator Award from the Canadian Institutes for Health Research. Dr. Fairn’s research is currently funded by the Canadian Institutes for Health Research and the Natural Sciences and Engineering Research Council of Canada, and previously by the J.P. Bickell Foundation and the Canadian Consortium on Neurodegeneration in Aging.

This award recognizes a record of outstanding achievement in research in one or more of the fields of biochemistry, molecular or cellular biology, undertaken in Canada by a Canadian scientist. 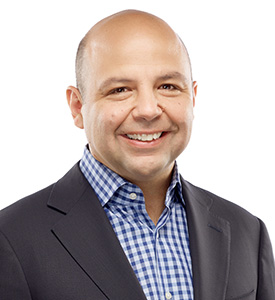 Dr. Durocher grew up near Montréal and obtained a B.Sc. degree in Biochemistry at Université de Montréal before graduating with a Ph.D. degree in Experimental Medicine from McGill University. Dr. Durocher undertook his post-doctoral training and established his group at the Lunenfeld-Tanenbaum Research Institute in Toronto, where he has been ever since. Dr. Durocher’s overarching interest lies in understanding how cells maintain genome integrity, with an emphasis on the detection, signalling and repair of DNA double-strand breaks. Dr. Durocher has received numerous awards for his work, including the 2015 Paul Marks Prize from Memorial Sloan-Kettering. Dr. Durocher also co-founded Repare Therapeutics, an oncology drug discovery company that aims to discover new drugs based on the principle of synthetic lethality that target genome instability in cancer based in Montréal.

This award is given in honour of the late Jeanne Manery Fisher, Professor of Biochemistry, University of Toronto. Dr. Fisher was not only an outstanding biochemist, but a remarkable teacher. She was instrumental in creating the Society’s Equal Opportunity Committee and fought diligently for the position of women in science. This award recognizes an eminent Canadian woman scientist who has a distinguished career in the fields of biochemistry, molecular or cellular biology or genetics, resulting from her outstanding contributions to research, teaching or society. 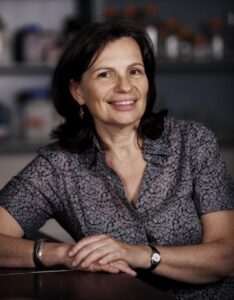 Dr. Susan Cole joined Queen’s faculty after her B.Sc. (Biochemistry), Ph.D. (Pharmacology), and post-doctoral training at the National Institutes of Health (Molecular Biology). She has been a Cancer Care Ontario Scientist, a Tier 1 Canada Research Chair, and served as Queen’s first Deputy Provost. Using multidisciplinary approaches, her lab has been devoted to understanding the biochemical mechanisms that limit the effectiveness of cancer chemotherapy. Dr. Cole is best known for her discovery and characterization of MRP1/ABCC1, an ATP-binding cassette membrane protein that acts as a multidrug and physiological organic anion efflux pump. She has published >240 research articles that have been cited >28,000 times, and has been primary mentor to >60 graduate students and postdoctoral fellows. Dr. Cole has also made significant contributions to the American Association for Cancer Research, and the American Society for Pharmacology and Experimental Therapeutics. She was Deputy and Senior Editor of Molecular Cancer Therapeutics and was on the Editorial Board of the Journal of Biological Chemistry, Cancer Research, and Molecular Pharmacology. Dr. Cole has received multiple recognitions of her research including: the National Cancer Institute of Canada Diamond Jubilee Award; the Pfizer Senior Scientist Award (Pharmacological Society of Canada); and PARTEQ Innovations 25th Anniversary Award for “Most Licensed Technology”. She is an elected fellow of the Royal Society of Canada and the Canadian Academy of Health Sciences, and received a Queen Elizabeth II Diamond Jubilee Medal.

The CSMB Arthur Wynne Gold Medal is presented to one or more individuals who have made a major contribution to biochemistry, molecular and cell biology in Canada over their career. The recipients of this life-time achievement award typically have attained an international profile in research, have played a major role in the development and promotion of the discipline in Canada, and have a long-standing record of service to the academic community. The Medal is named in honour of Professor Arthur M. Wynne, the first President of the Society, and was initiated in 2007 to celebrate the 50th Anniversary of CSMB. 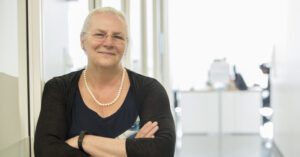 Dr. Mes-Masson trained as a molecular oncologist and obtained her Ph.D. from the Department of Microbiology and Immunology at McGill University in 1984. From 1984-1986, she completed post-doctoral studies at the Molecular Biology Institute, University of California Los Angeles, in the laboratory of Dr. Owen Witte, where she was the first to clone the full length BCR-ABL transcript implicated in Chronic Myelogenous Leukemia. After a short period as a research associate at the Biotechnology Research Institute, Dr. Mes-Masson joined the Institut du cancer de Montréal and the Department of Medicine at the Université de Montréal in 1989. A full professor since 2001, Dr. Mes-Masson was the scientific director of the Institut du cancer de Montréal and Director of cancer research at the Centre de recherche du Centre hospitalier de l’université de Montréal (CRCHUM) from 2003-2018 and in 2017 accepted the position of Associate Director, Basic and Translational Research, at the CRCHUM. In 2003, Dr. Mes-Masson was named the Director of the Réseau de recherche sur le cancer du Fonds de recherche du Québec – Santé (FRQS), a provincial cancer network of over 100 scientists focussed on translational and clinical cancer research (www.rrcancer.ca). Dr. Mes-Masson is a founding member of the Canadian Tumour Repository Network that focusses on enhancing capacity and quality of biobanking to support research (www.ctrnet.ca). In 2008 Dr. Mes-Masson was named the Quebec node coordinator for the Terry Fox Research Institute (TFRI). Dr. Mes-Masson has authored over 250 publications in cancer research. In addition to her pioneering work in biobanking, the major focus over her research in the last three decades has been ovarian and prostate cancer. While maintaining an active basic research program that focusses on the molecular events that contribute to cancer initiation and progression, Dr. Mes-Masson has also established a translational research program largely focussed on delivering personalized medicine in oncology. Her recent fundamental research focusses on the prediction of therapeutic responses and the development of new therapeutic agents for ovarian and prostate cancers.

The CSMB is a member of: